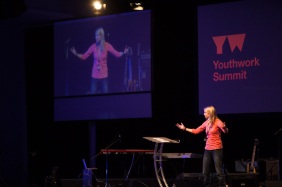 I’ve woken this morning to a flurry of messages about this piece on the God Loves Women blog, about the numbers of female speakers invited on to the platforms of Christian conferences. The event I help to lead, The Youthwork Summit, fares pretty well in comparison to some of the others, although having looked through my own stats today, I believe the numbers currently on the site against us are actually incorrect (I make it 17 female and 16 male speakers) – so I’ve asked for a correction which will hopefully be live by the time you read this.

It might seem a little bit petty of me to point this out, but I’m doing so because we worked really hard to achieve that figure. I want to make it clear that it was intentional. We ended up passing over (or saving for a future event) a lot of talented male speakers in the end, in order to maintain it. We believe that God has gifted men and women equally – in communication, youth work, innovation and all other things that qualify a person to be a YWS speaker – and so we wanted to make sure we reflected that belief in our practice.

I don’t mind confessing that the journey wasn’t easy. The usual networks and routes for finding talented speakers inevitably lead you to more male names than female, because that’s what the status quo looks like. So for us it’s meant throwing our net wide, having a lot of intentional conversations. It also meant offering coaching to first-time speakers who we had a hunch might be great (they were) and it even meant taking a couple of risks on people who would never have even considered getting up in front of more than 1,000 people to speak. They paid off. The event was a resounding success – and ended with the most extraordinary, prophetic conversation between an ageing male preacher (Tony Campolo), and a brilliant female youth specialist (Rachel Gardner) – if you’ve never watched it, it’s free – like all our talks – here, but I’ve also embedded it below.

Until yesterday, when a US blogger raised this issue and a number of people started commenting on it on both sides of the Atlantic, we’d never actually made a point of telling people we had so many female speakers. In truth, no-one really noticed. Perhaps that was our biggest triumph of all.

I also read this interesting piece from the wondrous Jenny Baker this morning, taking the same issues a little deeper. I don’t yet know if I agree with everything she says, but it’s a very stimulating read from a very important voice, and someone who helped us as an event to get better in this area.

6 responses to “On the Youth Work Summit and female speakers”