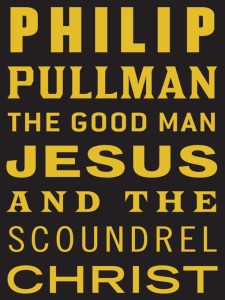 What’s the opposite of redemption? Reduction? Desecration? Whatever the definitive answer might be, in his new book The Good Man Jesus and the Scoundrel Christ, Philip Pullman may have created the perfect antonym for the redemptive story.

Pullman’s book, provocatively titled, released at Easter and published in a series called ‘Myths’, could be perceived as a red rag to the more bullish elements of the Church. Yet while I’d literally hurled my copy across the room within the first ten pages, I discovered that what at first seems dangerous and radical quickly settles down into little more than one man’s rant against the faith. In trying to reinterpret the Gospel story as something less miraculous, he only succeeds in finding a version of events that is less plausible. In doing so, I believe he unwittingly arms the Church with a helpful evangelistic tool, as well as some good and helpful challenges.

‘THIS IS A STORY’, booms the back cover of the book: a giant caveat to excuse any offence caused by the contents. The Good Man Jesus… claims to be ‘about how stories become stories’. Its central thesis is that Jesus was simply a good man who lived and died – permanently – and that the miraculous elements of the Gospel stories were painted in by his earnest and faithful followers afterwards. Pullman seeks to separate Jesus the historical figure from Jesus the legend. His mechanism for doing so is a mythical ‘gospel’, authored by Jesus’ imagined twin brother, Christ.

Jesus is the great teacher whose radical ideas both earn him a cult religious following, and cause consternation among the religious authorities. So far, so orthodox. Yet crucially, this Jesus is not divine. It is only his brother’s ambition to provide future generations with a messianic figure of hope that ensure he will ‘live on’ beyond his agonising – but no more than symbolic – death on the cross. While Jesus is the classic idealist, Christ is pragmatic – a man with a vision for a church that will last for millennia, which needs a great myth to propel it forward. No prizes for guessing what Pullman’s real target is here: as ever his disdain for the established Church is present and correct.

Pullman isn’t suggesting of course that this alternative version is what really happened; ‘this is a story’, remember. His Big Idea is that history has been, in his Christ-character’s words, ‘irradiated’ by the greater ‘truth’ of a miraculous Jesus legend. It may not have been like this exactly, Pullman is saying, but something like this provides a better explanation for the extraordinary growth and lifespan of the Church than the accounts of the canonical Gospels.

Except it doesn’t. Pullman fails on multiple occasions to craft a credible alternate reality. He can’t make the story fit his reinterpretation without creating plot holes, and this appears gratingly uncharacteristic for such a great writer (this is the man who wrote the extraordinary His Dark Materials trilogy). There is a repeated feeling that he is forcing the story in an unnatural direction in order to make it unmiraculous. If Pullman himself can’t come up with a plausible alternative, even in the medium of fiction, it rather dents his theory that it simply must have happened a different way.

It’s on these grounds that I made that rather bold claim that this book could actually work in the Church’s favour. Pullman is actually a great advocate for the historical Jesus, faithfully reproducing much of his teaching in a paraphrase worthy of Eugene Peterson. The reader is meant to like this man; to acknowledge him as a great teacher and leader. So when Pullman’s rationalisation of the miraculous falls flat, the potential exists for that dissatisfied reader to return to the ‘alternative’ version of events provided in the Gospels.

Some examples, then, of Pullman’s attempt to crowbar the historically supported claims of the Gospels into his godless worldview. Rather smugly, he casts Mary as a simpleton, tricked into sleeping with a man who tells her he’s an angel. She then gives birth to the twins, believing that she remains a virgin because of the father’s angelic claims, and thus the subtly subverted story begins. This man reappears later as a mysterious advisor to Christ, having masterminded the virgin birth as a means to creating the Church – yet his entire plan rests on that single sexual encounter resulting not only in a pregnancy, but a multiple birth. In Hollywood, they talk of ‘Jumping the Shark’, the moment at which a previously successful movie or TV show has a logic malfunction and takes an absurd new direction which shatters the audience’s engagement with it. In this book, that leap happens on page 9.

Perhaps more baffling is the excuse that Pullman – a master of storytelling remember – gives for the healing of the paralysed man. Jesus is teaching in the crowded house, and the man is lowered through the roof, but again, there is no true miracle. Instead, Pullman tells us, ‘the man was so strengthened and inspired by the atmosphere Jesus had created that he found himself able to move.’ Does Pullman really believe this to be a better explanation of events?

The book is at its best – and of course I would say this – when it is bringing the extraordinary character of Jesus to life, underlying the author’s fascination and admiration of the historical man. It only gets into trouble when forcing that character into situations that just don’t make sense – Pullman’s Jesus utterly and unexpectedly loses his faith in the garden of Gethsemane, and all that carefully crafted characterisation rapidly withers away to reveal the ranting author behind it. In this scene, and in Christ’s similarly themed soliloquy on the final pages, Pullman shows his Church-hating cards far too blatantly. We’re left wondering how on earth these men would have the foresight to imagine the flawed institution of the second and third-millennia Church in such accurate, if subjective, detail.

The Good Man Jesus… does deliver plenty of challenges to the Christian reader, but they are helpful. Pullman’s mix of faithful paraphrase and distorted reinterpretation can occasionally catch you out, and is a reminder that we need to continually read and wrestle with the content and meaning of scripture. As we read, we should ask ourselves if we are able to give an answer to the author’s counter-claims. How seriously do we take apologetics? How certain are we of the reliability of the Gospels, and the evidence behind our version of events?

In addition, and perhaps more soberly, the foundation of Pullman’s argument should at least give us a moment of pause. Not because we’re following Christ instead of Jesus – which, by the way, is certainly not a new idea – but because of our natural tendency towards evangelasticity. We’ve all done it: added a detail to a story, or changed the order of events, in order to improve the impact of what God has done. It’s a natural tendency, familiar to those who debunk fortune-tellers and horoscopes, but we must resist the impulse. This one religious tendency is the foundation on which The Good Man Jesus… is built; our refusal to comply with it is the surest way of ensuring that attacks such as this remain as they are; ultimately toothless.

Pullman’s book is flawed, but it certainly isn’t a bad read. Many thoughtful people who do not profess faith, but have a lot of time for the author, will read and enjoy it, and I am not suggesting that the cracks in its argument are so obvious that it provides an evangelistic barrel for us to shoot fish in. If we treat the author, his work and its readers with respect, however, we have a genuine opportunity here to engage people with our story. As we do so, we should be disciplined enough never to launch personal attacks on Philip Pullman. Our own historical and truthful Jesus – who is the Christ – commands us only to love him. It is our ability by the Holy Spirit to do so which will ultimately speak best of the true, life-changing gospel.

This article first appeared as part of the culture column in Christianity magazine. You should all read Christianity you know. Get a free copy here now.